This guest post comes from Robyn Embry, a local pro downhill racer living in Kings Beach, California, for the past seven years. She can be found climbing rocks and skiing powder when not enjoying life on two wheels; her blog http://therobynator.blogspot.com contains the extended version of this and other adventures, including the fun and tribulations found within a season of mountain bike racing.

Where is one of the coolest places to spend a fall away from Tahoe? In Moab, Utah! I just returned from a three-week trip with my boyfriend Kit and our dog Pork Chop–and wow, what an adventure! Moab is similar to Tahoe with its wide array of outdoor pursuits close at hand, yet so different because of the stark desert landscape of sculpted sandstone and sagebrush. Still, it almost feels like a home away from home. On top of being a mountain biker’s paradise and home of the famed Slickrock Trail, Moab itself has tons of good rock climbing, with the legendary crack climbing area Indian Creek just an hour’s drive south. It was a good thing the nearby LaSal mountains had no snow yet, because we would have overloaded the van with skis in addition to bike gear and a massive rack of cams for climbing at Indian Creek. The livin’ was easy on this trip. In fact, the only hard parts to adjust to were the long, cold desert nights; with the sun going down at 5 pm, we’d be in down jackets around the campfire for another 5 hours until bedtime, then staying cozy underneath more down until the morning sun warmed the landscape. 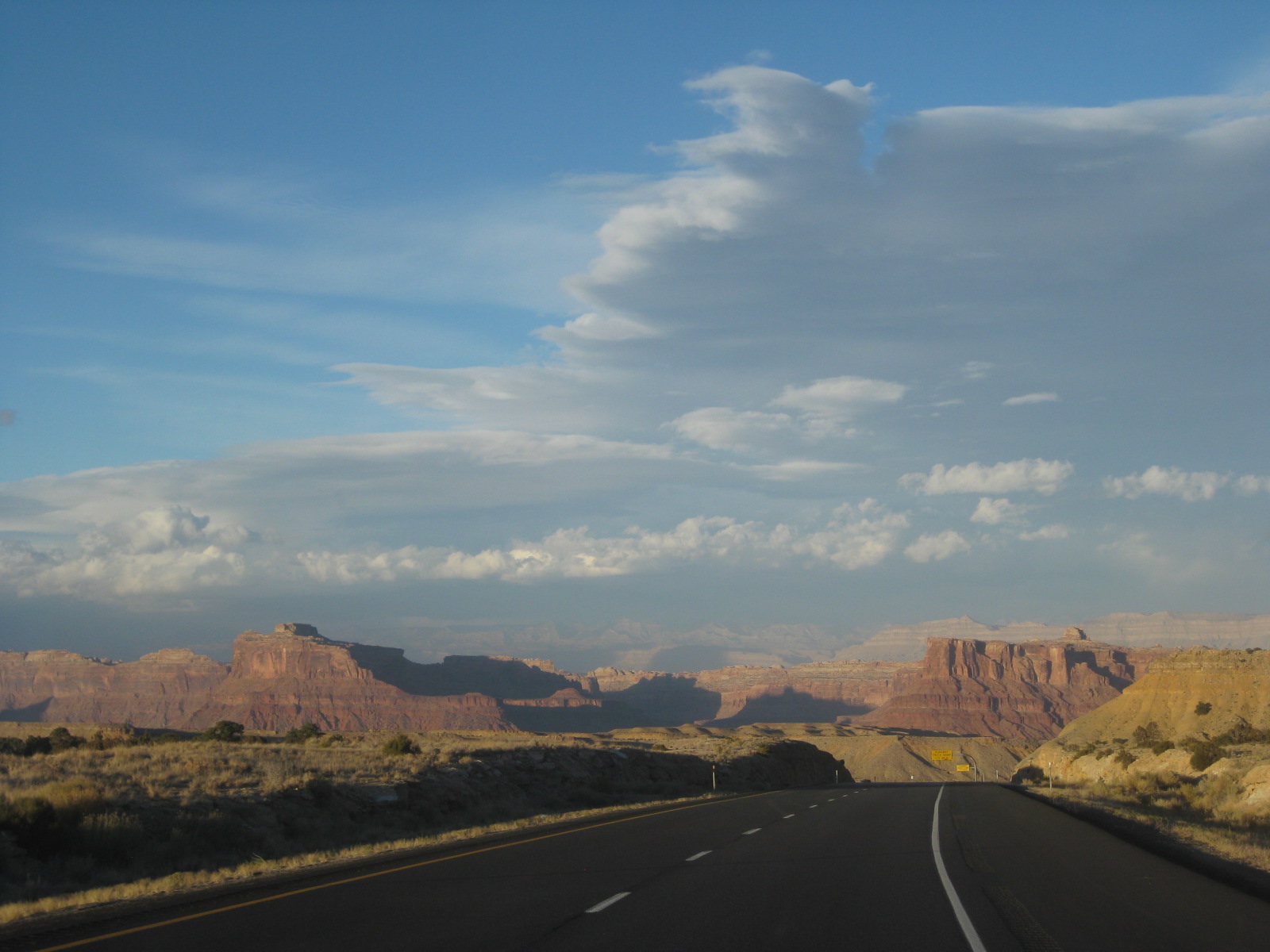 Approaching an enchanted landscape of slickrock and sandstone.

The bike riding fun began with the Porcupine Rim trail, which a group of six of us shuttled from the intersection of the upper and lower singletrack trails, an easy way to cut out most climbing (A trail map or guidebook is good to have along).  Porcupine Rim wound up being the best ride of the trip in my opinion, even after completing a couple other Moab classics. Filled to the brim with rocks, drops, and heady technical sections, it felt like a giant mountain bike playground on a 20-mile downhill run! Starting high on the LaSal Mountain access road, it begins as a singletrack with some rocks, then goes into a fast and rocky 4×4 trail, then back into a winding cliff-edge singletrack with a number of technical rocky sections before finally dropping down to the Colorado River. At 20 miles long, this trail made for over two hours of adventure, so we had to bring full hydration packs to have enough water in the dry desert environment. Despite being a mostly downhill ride, it was quite tiring hanging on through all the rocks and keeping up with the boys, so I was happy to also have some energy snacks packed away – and definitely a spare tube or two – one member of our group had two flats during the ride.  It was also my first ride wearing my new Smith sunglasses, and I couldn’t have been happier. They are so comfy and don’t move an inch on rough terrain, nor do they require readjustment, so I almost forgot I was wearing them the whole time.

The Slickrock Trail is another great ride, perhaps THE Moab classic, but involves much more pedaling than the Porcupine Rim Trail. These climbs are no joke; mostly short and some impossibly steep, if one of us couldn’t make it we were forced to dismount and walk up in slippery bike shoes, all the while wishing we had worn climbing shoes. Slickrock doesn’t make for the easiest ride by a long-shot, but for the amazing views and outstanding traction, it’s a great time! Just remember to bring a chain tool in case of a snapped chain on one of the intense climbs. 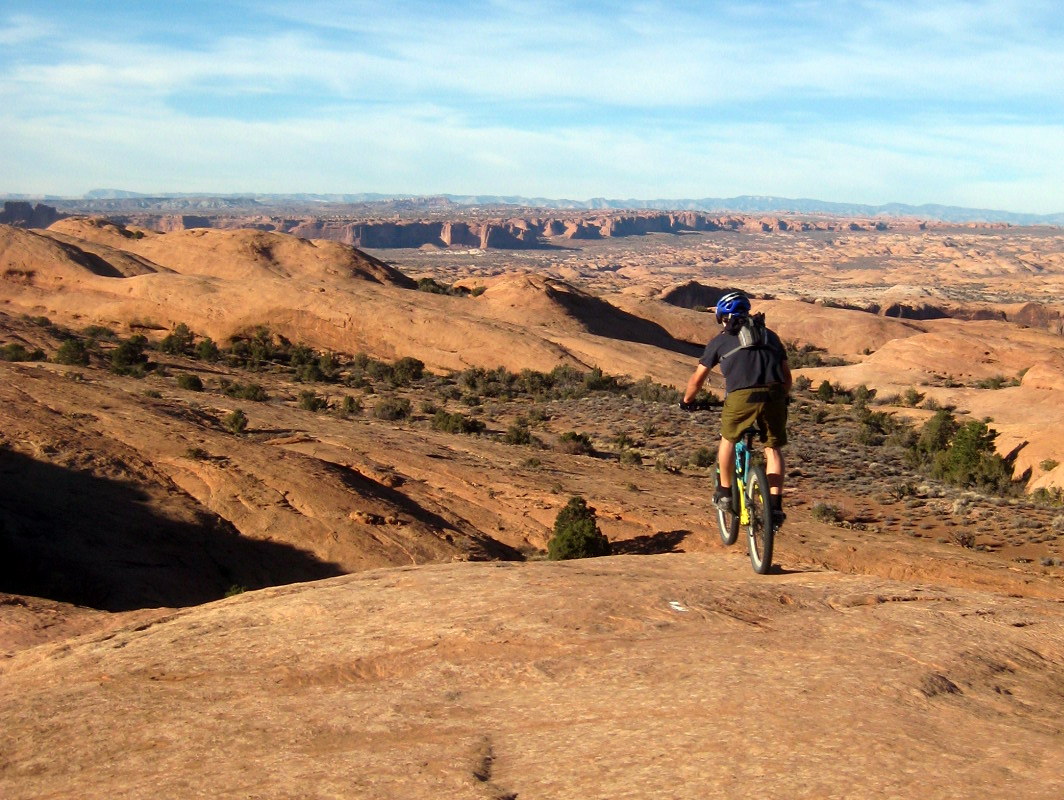 The third ride we cranked out was Amasa Back, an out-and-back with loop options, and some slickrock exploration at the top of the mesa. Amasa Back is a great trail for those who enjoy technical climbs instead of grinding up fire roads, and the climb provides a great opportunity to scope out lines for the descent. That’s a good thing, because there are drops ranging from one to four feet with pretty flat landings, and almost always an easier way around. Scenic views abound over the Colorado River and Long Canyon on one side, and Poison Spider Mesa to the other side (a good ride also, but we didn’t get to it this trip). For skilled riders this singletrack is a must, with an entertaining uphill climb and so many different options for fun and challenge on the high speed descent. 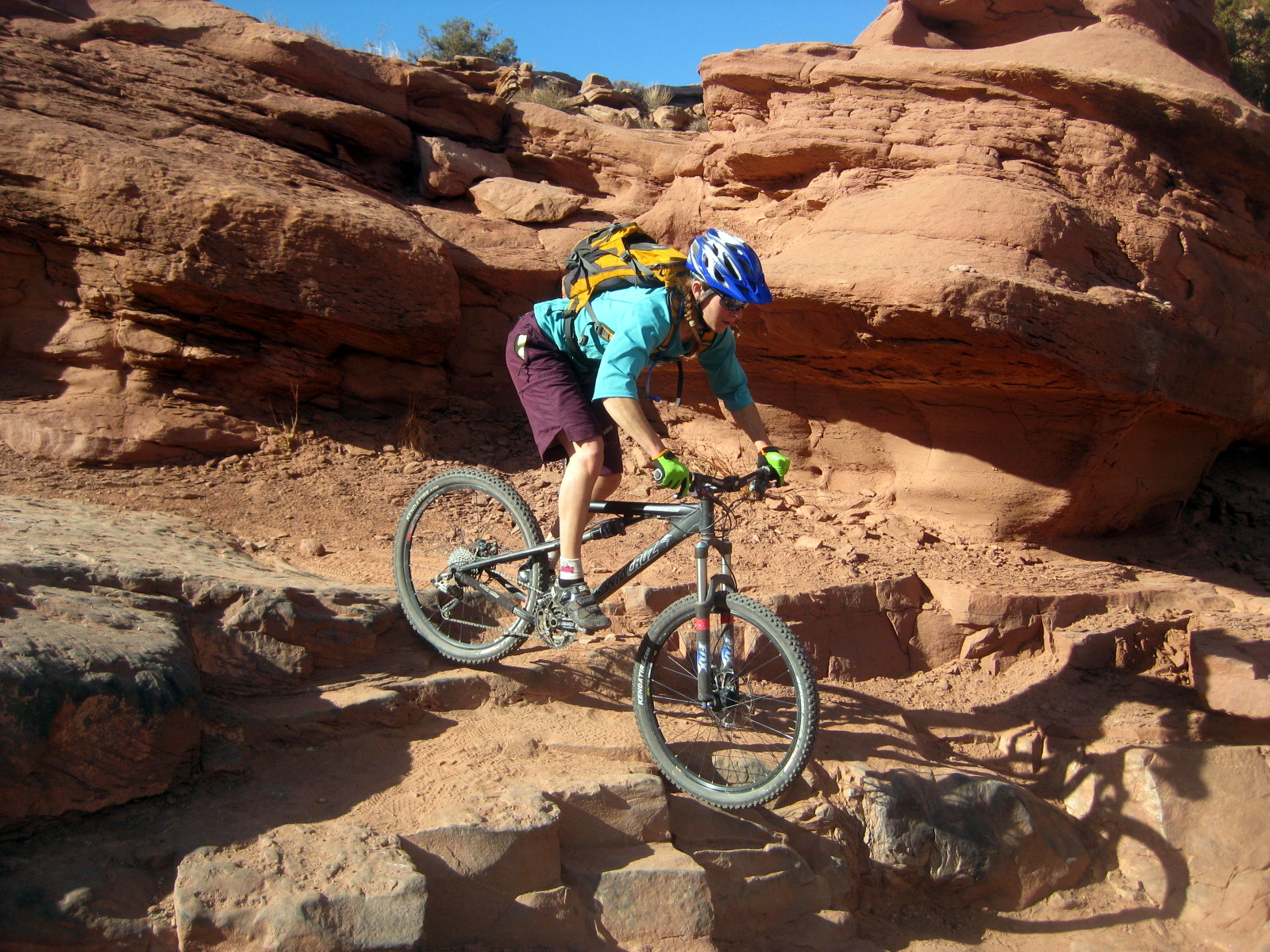 In the backseat – the only way to go.

Between bike rides we sampled some of the climbs on Wall Street, just outside of Moab. The ultimate lazy person’s crag, the approach is little too nonexistent and it is possible to belay from one’s vehicle, or a camp chair next to the cooler full of snacks.  The majority of climbs are moderate-to-difficult cracks, with a few bolted sport climbs and easy top-rope slabs, so a wide variety of climbing gear is useful. We stuck to the crack climbs to warm up for Indian Creek and enjoyed some classics in the mid-5.10 to low-5.11 range: Roadside Distraction, El Cracko Diablo, and Mother Trucker were favorites here.  Face-holds and edges are common, so crack climbing techniques need not be perfect. A climbing helmet is also good idea since the Navajo sandstone is occasionally crumbly and loose blocks can be found on several climbs, as mentioned in the guidebook.

Down at Indian Creek the climbing is almost entirely traditional, and we found while searching among shops in Moab that the guidebook is now out of print! Luckily, the Utah guide contains some of the more popular crags that just worked fine for this trip. For the first two days we both taped up, a good idea when wrestling wider cracks, and my fist just barely locks into a Black Diamond #3 C4 size crack. Our third day was mostly finger cracks and liebacks, widening to an awkwardly sized .75 C4, which I could barely squish a hand into, even without tape. Here, good technique along with shoes that can wedge into cracks with relative comfort are necessary – no tight sport shoes here! The hard Wingate sandstone has very few features and is difficult to smear a foot on since it has been worn out from thousands of ascents, so jams must be solid and a roll of climbing tape can be helpful. The highlight of climbing in the Creek was both of us sending Coyne Crack Simulator, a 5.11 offset crack that contains a difficult stretch of the .75 size; the easy way out is to lie back, but that has its own set of challenges on lead. 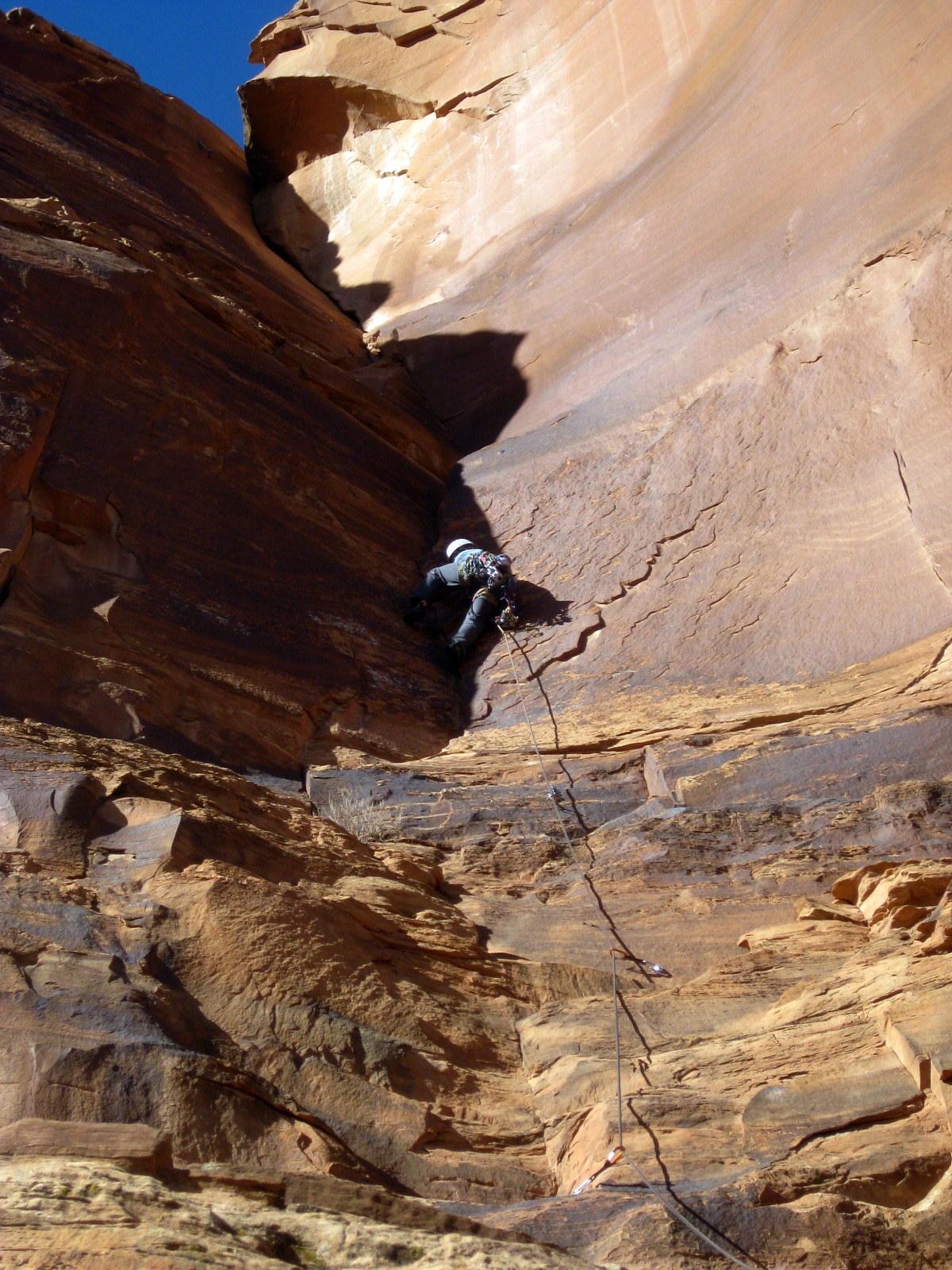 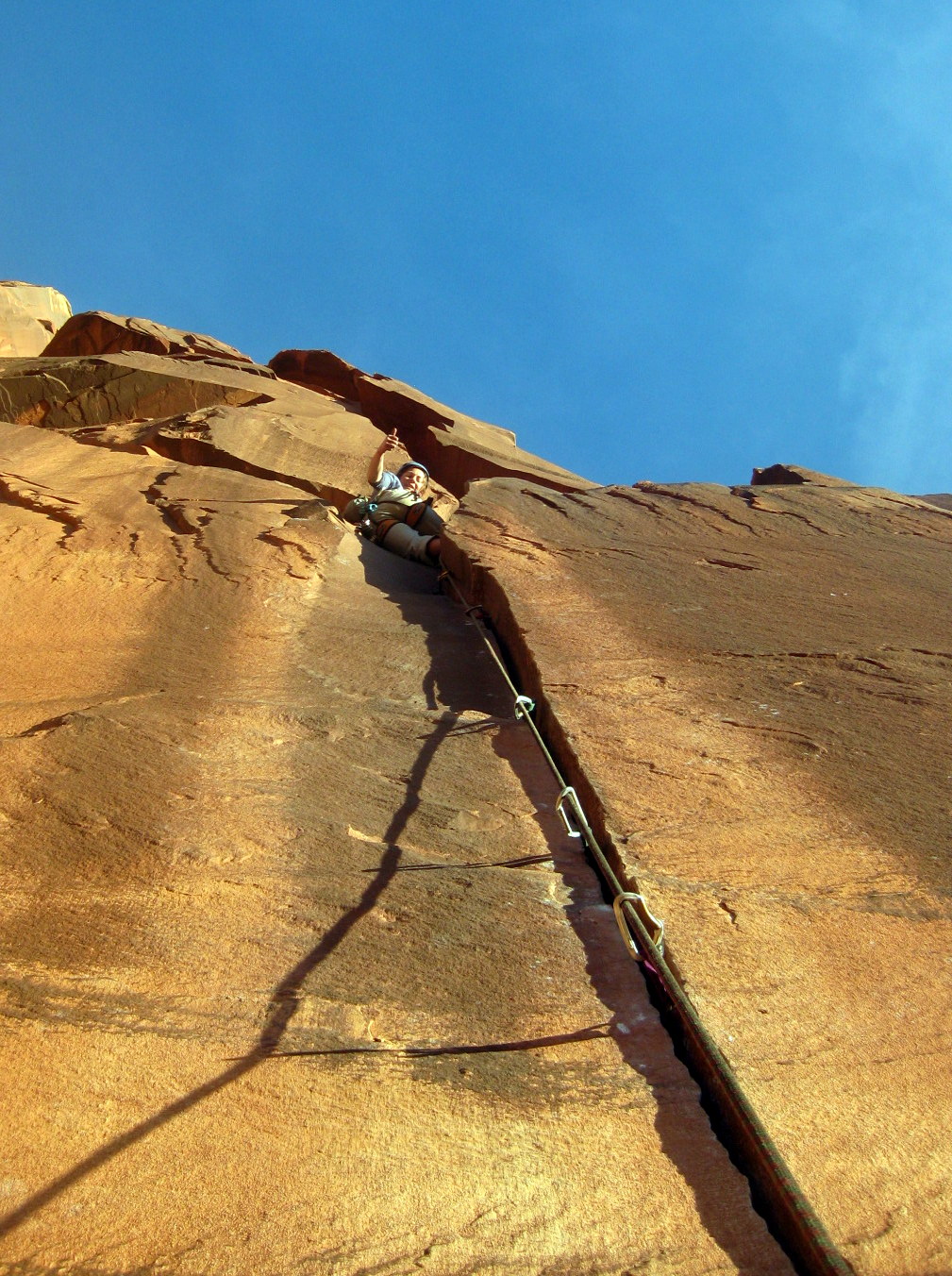 Topping it all off, Moab is a cool town with a great vibe, and a fun place to hang around on days off from climbing and riding. The only thing that would make it even better would be hot springs to soak in after dinner and kill some of those cold, dark evening hours. Between the massive amount of climbable rock and so many miles of shred-able bike trails, it’s easy to escape crowds on a busy weekend, and the the sun warms everything up during the day to make fall temperatures perfect for playing outdoors.

Adam Broderick manages the web content at Tahoe Mountain Sports. When he is not in the office, he tries his best to be in the field doing something awesome.

2 thoughts on “Moab Mountain Biking And Crack Climbing In Fall”